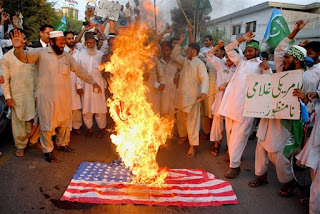 By HUSSAIN AFZAL and NAHAL TOOSI (AP) – 8 minutes ago

PARACHINAR, Pakistan — Soldiers fought for control of the Pakistani Taliban chief's hometown as they pressed an offensive along the Afghan border, while intelligence officials said suspected U.S. missiles hit territory controlled by another insurgent, threatening to undermine deals that keep some militants out of the battle.

Early Thursday, a pair of gunmen on a motorbike killed two soldiers in the Pakistani capital, Islamabad, police said.

The attack appeared to be part of a wave of bloodshed that has killed more than 170 people in Pakistan over the past three weeks, pressuring the military to launch the offensive in South Waziristan six days ago. The offensive is considered a critical test of nuclear-armed Pakistan's campaign against Islamist extremists who also are blamed for attacks on Western forces in neighboring Afghanistan.

The military is advancing on multiple fronts in South Waziristan, a tribal region home to al-Qaida fighters and Taliban insurgents who have focused on overthrowing the U.S.-allied Pakistani government. 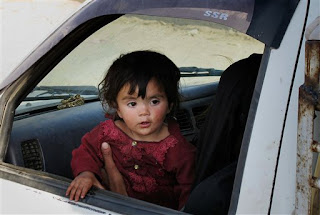 The fight for the town of Kotkai is symbolically important because Pakistani Taliban chief Hakimullah Mehsud and a top deputy, Qari Hussain, hail from there. Kotkai also lies on the way to the major militant base of Sararogha.

An army statement Wednesday said forces were engaged in "intense encounters" in hills surrounding Kotkai and had secured an area to its east. Two intelligence officials said troops had secured parts of the town and destroyed Mehsud's and Hussain's homes, but army spokesman Maj. Gen. Athar Abbas denied that late Wednesday, saying there was no significant fighting inside the town yet.

The army believes Mehsud and Hussain remain in the region directing militants' defenses.
Security forces on another front cleared Khaisura, a village dotted with heavily fortified bunkers complete with six-foot (two-meter) thick concrete walls, the army said. The statement reported three more soldiers were killed, bringing the army's death toll so far to 16, while 15 more militants were slain, bringing their death toll to 105.

It is nearly impossible to independently verify information coming from South Waziristan because the army has closed off all roads to the region. Analysts say both sides have exaggerated successes and played down losses in the past.

The suspected missile strike Wednesday targeted Spalaga, a village with at least 1,000 homes in the North Waziristan tribal region. Two intelligence officials said at least two suspected insurgents were killed. Their identities were not immediately known.

All the intelligence officials interviewed Wednesday requested anonymity because they were not authorized to speak to the media.

The U.S. has launched scores of missiles in South and North Waziristan over the past year, including one that killed former Pakistani Taliban chief Baitullah Mehsud in August.
But the latest strike was especially sensitive.

It hit territory controlled by Hafiz Gul Bahadur, a militant leader the army has coaxed into remaining neutral during the offensive against the Mehsud faction in South Waziristan. Pakistan considers Bahadur, along with militant leader Maulvi Nazir of South Waziristan, lesser priorities because they focus on battling U.S. and NATO troops in Afghanistan, not targets inside Pakistan.

Analysts said the missile strikes, which have long angered ordinary Pakistanis and motivated militant fighters, could stir fury among Bahadur's insurgents, straining the deals with the army.

"This has the potential of messing up the calculus of the Pakistanis," said Kamran Bokhari, an analyst with Stratfor, a U.S.-based global intelligence firm. "It could broaden the scope of the war for the Pakistanis, which they're not prepared for at this time."

Pakistan routinely condemns the American missile strikes as violations of its sovereignty, warning that the civilian casualties they cause deepen anti-U.S. sentiment and complicate the fight against terrorism. 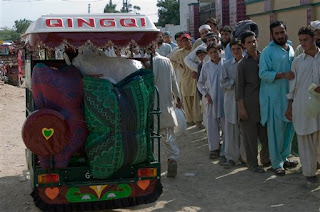 But many suspect the two countries have a deal allowing the drone-fired attacks. U.S. officials rarely discuss the covert operation, but have said in the past that it has killed several top militant leaders and is too valuable to set aside.

The attack on soldiers in Islamabad occurred early Thursday when two gunmen on a motorcycle drove near an army jeep, firing their weapons at the troops inside, police official Zaffar Abbas said. Two soldiers died, while one was wounded. 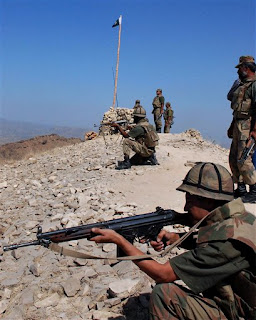 Footage on private Express television channel showed the bulletholes splattered on the green jeep's windshield. No group immediately claimed responsibility for the attack, but Islamist extremists frequently target security forces throughout the country.

U.S. officials hope that Pakistan will eventually broaden its fight to include all insurgent factions, and have routinely dismissed peace deals as tools that strengthen insurgent groups. But for now, some American officials have said it is logical for the Pakistani military to target its top internal enemy. 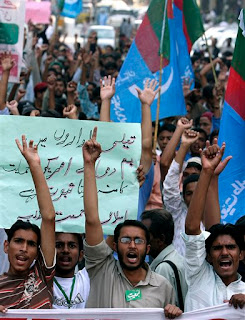 The army has deployed some 30,000 troops to South Waziristan against about 12,000 Taliban militants, including up to 1,500 foreign fighters, among them Uzbeks and Arabs.

Popular posts from this blog

November 21, 2012
Women are active in show business like never before, but will they surpass the status Bollywood heroes enjoy? Never, says Bipasha Basu, who feels there is minimum opportunity for female actors in the Hindi film industry “In Bollywood, the opportunities for female actors are very minimum. There’s not much choice for us except to be safe and look pretty and do some nice dance numbers,” said Bipasha in an interview.


The year 2011 saw films like The Dirty Picture, No One Killed Jessica and Saat Khoon Maaf – showcasing a promising trend as far as women finding prominent roles in movies was concerned. But Bipasha says: One Dirty Picture hasn’t changed anything much. It’s just that you’re lucky sometimes to get a Dirty Picture or for my sake, get a Raaz, Jism or Corporate. As one off, you will get a film, which will be talked about in the context that ‘Oh! Women are getting into trend now! It’s going to be such a great time for female actors’. The thing it is never. “We all are go…
3 comments
Read more

December 02, 2019
Kareena Kapoor is presently busy playing cameos and grooving to item numbers for free. She has agreed to do item number for good friend Salman Khan’s ‘Dabangg 2’ and now she has shot for Sanjay Leela Bhansali’s ‘Rowdy Rathore’ starring Sonakshi Sinha and Akshay Kumar.
The highest paid actress of Bollywood has shot the cameo for her good friend Sabina Khan, designer cum producer. Bebo and Sabina are friends from days when Kareena was dating Shahid Kapoor. Sabina used to design Shahid’s outfit then.
Though Kareena broke up with Shahid, the actress maintained her friendship with Sabina. Kareena has done the cameo for free only for good friend Sabinaa who is co-producing the film with Sanjay Leela Bhansali.
Her role in the film has been kept under wrap except that she is playing a glamorous lass. Kareena confirms, "I have done the cameo for Shabinaa and Sanjay. Both are very dear to me."
Post a Comment
Read more

Poonia came up with her season's best throw of 59.39m but her effort fell short of 2012 London Olympics qualification 'B' standard of 59.50m.

She began with 59.39m before her next two efforts were foul throws. She could not improve upon her first attempt mark as she came up with 59.29m, 59.37m and 59.22m in her last three efforts.

Poonia expressed confidence that she would qualify for the Olympics in her next two meets coming up in the United States.

"I am happy to win gold medal and has full confidence to throw 61 to 62 meter in coming events. I was feeling little bit nervous today because of the knee problem I had a couple of months back," she said.

Poonia has been training at the Throws Centre at Concordia University at Oregon, Portland since July under the guidance of former Olympic champion Mac Wilkins.
1 comment
Read more